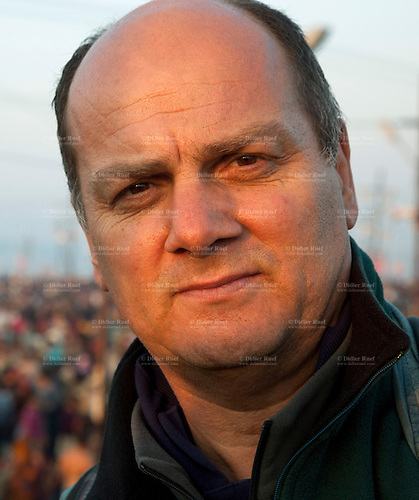 I am available for assignments anywhere in the world. Please Contact me.

I am a photographer, based in Lugano, working in and out of Switzerland. My photo essays are inscribed in time and focus on showing human beings, their daily life and social conditions, their environment, the waste and its recycling as well as the ecological problems created by man.

Didier Ruef was born in 1961 in Geneva, Switzerland. After graduating in Economics at the University of Geneva he took up photojournalism at the International Center of Photography (ICP) in New York. It was there that he developed his long-term essay on the life of a Puerto Rican family in Spanish Harlem, for which he won the Yann Geoffroy Prize in Milan, Italy, in 1990

Since returning to Switzerland in 1987, he has started to work as a freelance documentary photographer and photojournalist working in color and black & white and has visited all five continents, with a preference for Africa. He was a member of the Network Photographers Agency in London from 1991 to 1997 and a founding member of Pixsil from 2002 to 2009. He is now working as a freelancer photographer .

He is currently represented by the photo agencies Luz Photo and Redux Pictures.

He has worked with Médecins Sans Frontières, the Global Fund, the World Council of Churches, Heks (Interchurch Aid), the Swiss Red Cross and the Syngenta Foundation.

Among others, he had collective exhibitions in China, 10th Shanghai International Photographic Art Exhibition; in Tirana, Albania for Objective: People's World ; in Culturgest Lisboa, Portugal for O seculo do corpo. Trabalhos fotograficos 1990-1999; in Fotomuseum Winterthur in Switzerland for Weltenblicke. Reportagefotografie und ihre Medien.

Didier Ruef has published seven books: in 1998 Paysans de nos montagnes | Editions Monographic and in German translations as Bauern am Berg | Offizin Verlag and in Italian as Vita di montagna | Edizioni Casagrande; in 2005 Afrique Noire | Infolio Editions; in 2007 Enfants Prisonniers | DiDé; in 2011 Recycle | Labor et Fides in French and English and Recycle | Edizioni Casagrande in Italian and German; in 2012 Bestiarium | QTI in Italian; in 2019 Homo Helveticus | Till Schaap Edition in French and English; in 2021 the book 2020 | Till Schaap Edition in French, German, Italian and English.