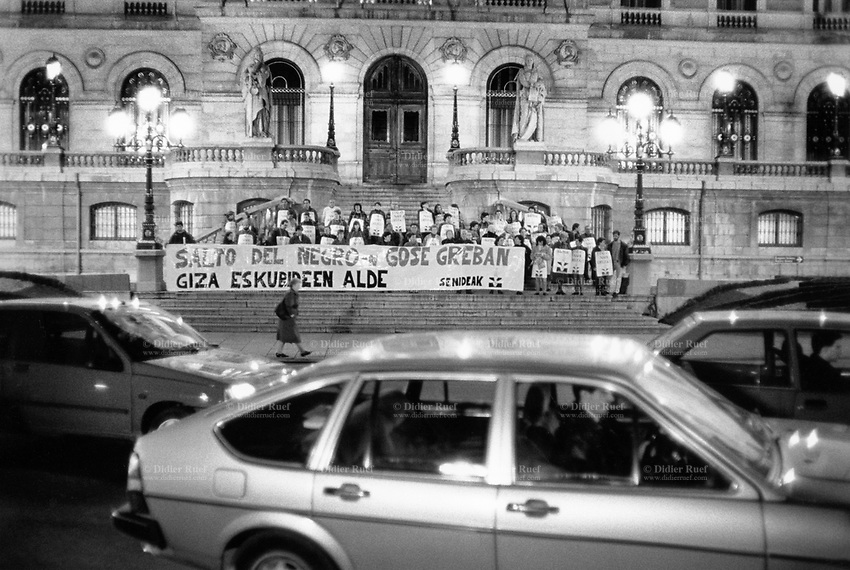 Spain. Basque Country. Spain. Basque Country. Bilbao is the largest city in the province of Biscay and in the Basque Country as a whole. Demonstration by members of "Senideak" in front of Bilbao's town hall. They want:
"Salto del Negro" - Prison in the Canary Islands. "Gose Greban" - Hunger's strike. "Giza Eskubideen" - For the human rights. Etxerat, originally called Senideak ('Relatives' in Basque), was created on 6 October 1991. Etxerat (Basque: meaning 'Homeward') is an association of family members of people who have been imprisoned or exiled because of their activity in support of the Basque National Liberation Movement. Most of those prisoners and exiles are members, or former members, of the Basque armed terrorist organization ETA. Others were not members of ETA but have been jailed for collaborating with it, or have been convicted of other crimes such as belonging to illegal organizations like SEGI or Gestoras pro Amnistía, belonging to or trying to rebuild banned political parties such as Batasuna and Askatasuna, participating in Kale borroka, or for the "public glorification of terrorism". Etxerat's primary activities are to support those family members, and to campaign to defend the rights of their imprisoned and exiled relatives. The Basque Country (Euskadi, País Vasco, Pays Basque), officially the Basque Autonomous Community (Euskal Autonomia Erkidegoa, Comunidad Autónoma Vasca, CAV) is an autonomous community in northern Spain. It includes the Basque provinces of Álava, Biscay, and Gipuzkoa. The Basque Country or Basque Autonomous Community was granted the status of nationality within Spain, attributed by the Spanish Constitution of 1978. The autonomous community is based on the Statute of Autonomy of the Basque Country, a foundational legal document providing the framework for the development of the Basque people on Spanish soil. 25.03.92 © 1992 Didier Ruef
© Didier Ruef 6191x4149 / 11.0MB