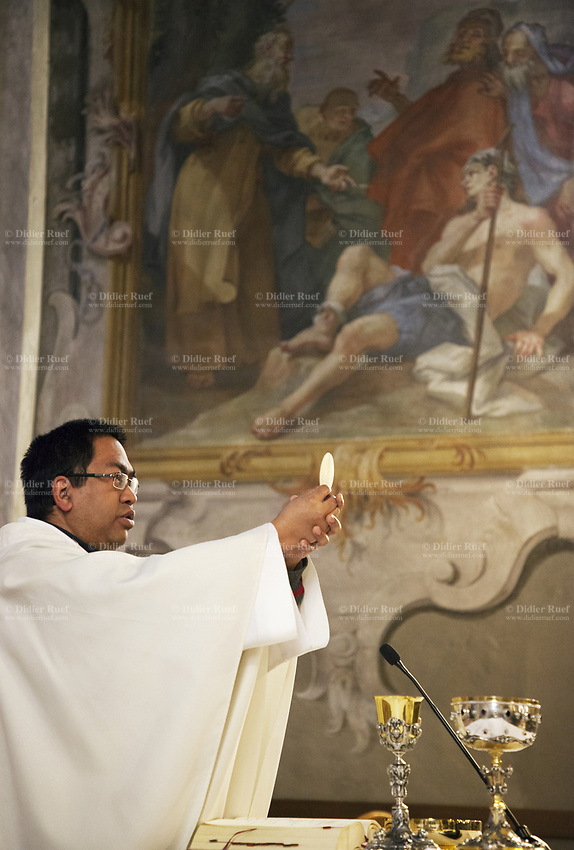 Switzerland. Canton Ticino. Lugano. Church "Sant'Antonio Abate». Don Herve Solofoarimanana is a catholic priest from Madagascar. He is celebrating the morning’s holy mass. Sacramental bread (Latin: hostia, Italian: ostia), sometimes called altar bread, Communion bread, the Lamb or simply the host, is the bread or wafer used in the Christian ritual of the Eucharist. Eastern and Western traditions both require that it be made from wheat. Transubstantiation is, according to the teachings of the Roman Catholic Church, the change of substance or essence by which the bread and wine offered in the sacrifice of the sacrament of the Eucharist during the Mass, become, in reality, the body and blood of Jesus Christ. A chalice or goblet is a footed cup intended to hold a drink. In religious practice, a chalice is often used for drinking during a ceremony or may carry a certain symbolic meaning. A paten, or diskos, is a small plate, usually made of silver or gold, used to hold Eucharistic bread which is to be consecrated. It is generally used during the service itself, while the reserved sacrament are stored in the tabernacle in a ciborium. 19.03.2018 © 2018 Didier Ruef
.
© Didier Ruef 3744x5550 / 17.3MB