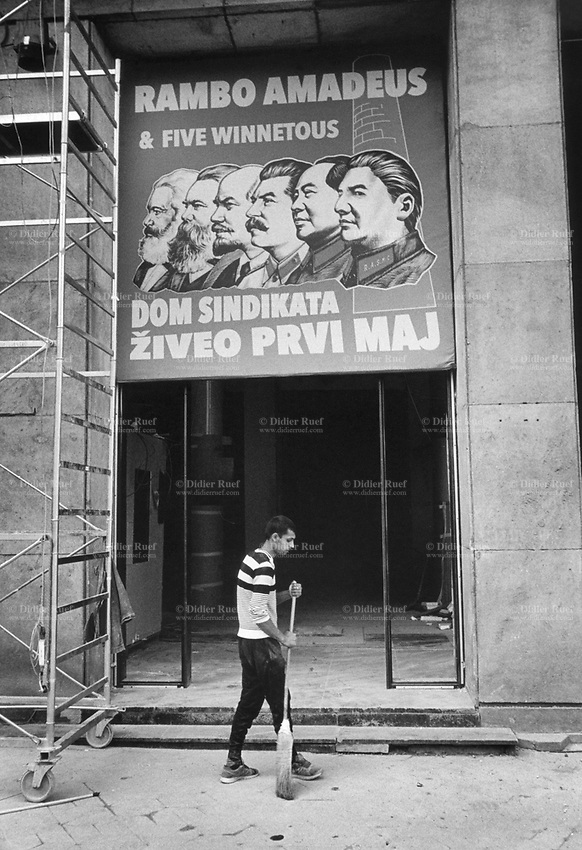 Serbia. Belgrade. A man sweeps in front of a building under renovation. Antonije Pušić (June 14, 1963), known professionally as Rambo Amadeus is a Montenegrin-born Serbian recording artist, author and performance artist. A self-titled "musician, poet, and media manipulator", he is a popular phenomenon on the music scenes of the former Yugoslavia. Winnetou is a fictional Native American hero of several novels written in German by Karl May (1842–1912), including the Winnetou-trilogy. A public notice about a concert by Rambo Amadeus and the Five Winnetous is hanged on the wall at the Workers Union home to celebrate the First of May. Political figures from old communist time (left to right): Karl Marx was a German philosopher, economist, historian, political theorist, sociologist, journalist and revolutionary socialist.
Friedrich Engels was a German philosopher, social scientist, journalist and businessman. Vladimir Ilyich Ulyanov, better known by the alias Lenin, was a Russian communist revolutionary, politician and political theorist. He served as head of government of Soviet Russia from 1917 to 1924 and of the Soviet Union from 1922 to 1924. Under his administration, Russia and then the wider Soviet Union became a one-party communist state governed by the Russian Communist Party. Ideologically a Marxist, he developed political theories known as Leninism. Joseph Stalin was a Soviet revolutionary and politician of Georgian ethnicity. He ruled the Soviet Union from the mid-1920s until his death in 1953, holding the titles of General Secretary of the Communist Party of the Soviet Union from 1922 to 1952 and the nation's Premier from 1941 to 1953. Ideologically committed to the Leninist interpretation of Marxism, Stalin helped to formalise these ideas as Marxism–Leninism while his own policies became known as Stalinism. Mao Zedong, commonly known as Chairman Mao, was a Chinese communist revolutionary who became the founding father of the People's Republic of China,
© Didier Ruef 3504x5118 / 8.6MB