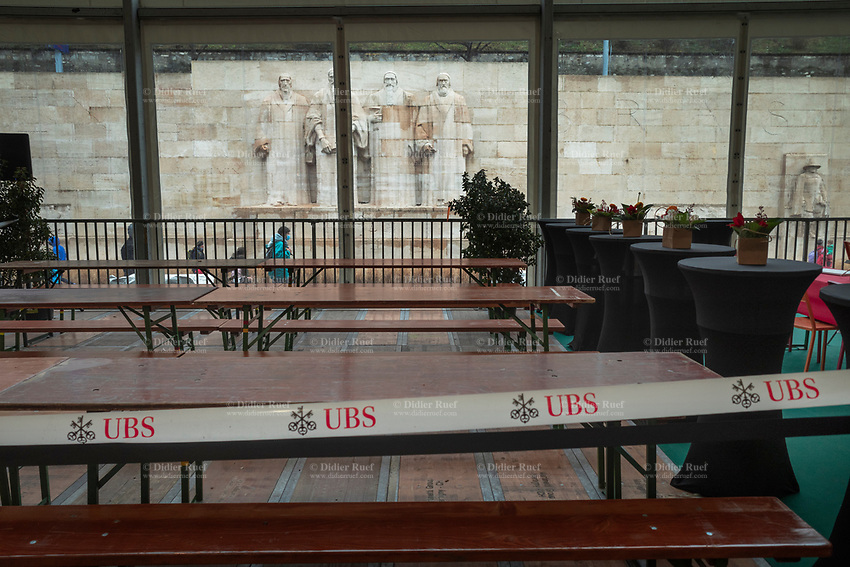 Switzerland. Geneva. Bastions Park. The Course de l'Escalade (Escalade race) is Geneva's biggest annual sporting event. It is held each December in the old town of Geneva as part of the Escalade celebrations. Temporary hall with UBS logos. UBS Group AG is a Swiss multinational investment bank and financial services company founded and based in Switzerland.
The Reformation Wall stretches for 100 m, depicting numerous Protestant figures from across Europe. The International Monument to the Reformation (French: Monument international de la Réformation, German: Internationales Reformationsdenkmal), usually known as the Reformation Wall (French: Mur des réformateurs), is a monument in Geneva. It honours many of the main individuals, events, and documents of the Protestant Reformation by depicting them in statues and bas-reliefs. It is built into the old city walls of Geneva, and the monument's location there is designed to represent the fortifications', and therefore the city of Geneva's, integral importance to the Reformation. During the Reformation, Geneva was the centre of Calvinism, and its history and heritage since the sixteenth century has been closely linked to that of Protestantism. Due to the close connections to that theology, the individuals most prominently depicted on the Wall were Calvinists. Sculptures of four great figures of the Geneva protestant movement: (left to right) Guillaume Farel (1489 - 1565), Jean Calvin (1509-1564), Theodore de Beze (1513-1605) and John Knox (1513-1572). William Farel (Guilhem Farel or Guillaume Farel), was a French evangelist, Protestant reformer and a founder of the Reformed Church. John Calvin (Jean Calvin) was a French theologian, pastor and reformer in Geneva during the Protestant Reformation. He was a principal figure in the development of the system of Christian theology later called Calvinism. Theodore de Beze was a French Reformed Protestant theologian, reformer and scholar who played an important role in the Refo
© Didier Ruef 6000x4000 / 13.3MB
Ricoh GR III