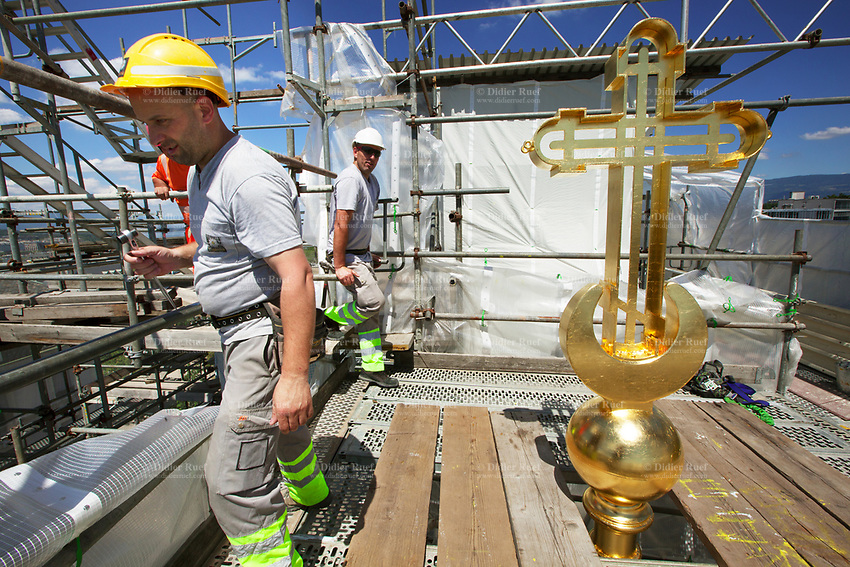 Switzerland. Geneva.The Russian Church (full name: Cathédrale de l'Exaltation de la Sainte Croix) is designed in a Byzantine Moscovite style. The church is a lovely 19th-century Russian Orthodox church topped with golden onion domes. The building, roof and bulbs undergo a complete revival restoration. The cross has already be covered by a thin coating of gold. The term gilding covers a number of decorative techniques for applying fine gold leaf to solid surfaces such as onion domes and crosses. A gilded object is also described as "gilt". The Russian church serves today not only the Russian community but also Bulgarians, Serbs, Coptic Christians and other Orthodox worshippers who do not have their own church in Geneva. In the background, the Jet d'Eau (Water-Jet) which is a large fountain on lake Geneva and is one of the city's most famous landmarks.
An onion dome is a dome whose shape resembles an onion. Such domes are often larger in diameter than the drum upon which they sit, and their height usually exceeds their width. These bulbous structures taper smoothly to a point. Three workesr with hard hats from Implenia, which is the largest construction company in Switzerland. 28.06.2016 © 2016 Didier Ruef
© Didier Ruef 5616x3744 / 15.8MB