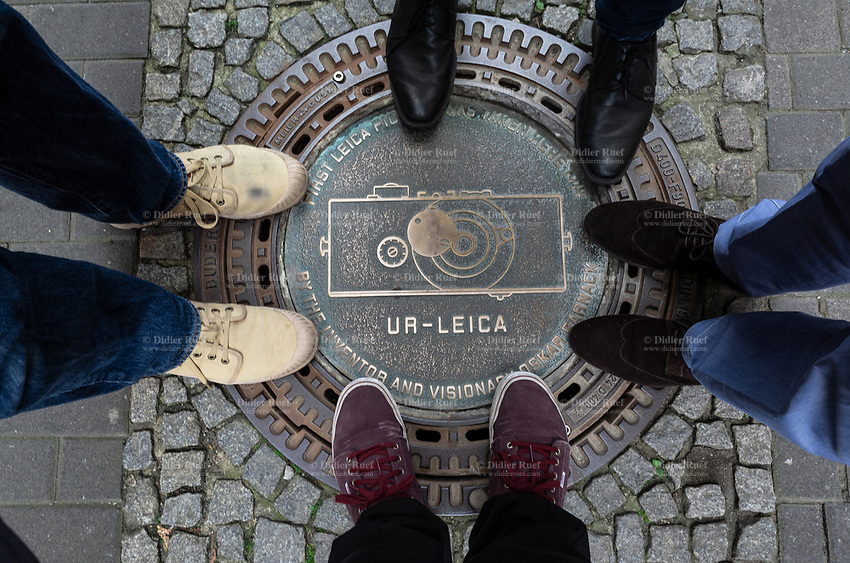 Germany. State of Hesse. Wetzlar. Four men and eight feet stand on the spot where Oskar Barnack took the first image of the Eisenmarkt with the Ur-Leica in 1913. The first 35 mm film Leica prototypes were built by Oskar Barnack at Ernst Leitz Optische Werke, Wetzlar, in 1913. The construction of the first, fully functional prototype of a revolutionary new still picture camera for 35 mm perforated film was completed by Oskar Barnack in March 1914. The camera had a full metal body, a collapsible lens and a focal plane shutter, which, at the time, had no overlapping curtains. A cap, fixed to the lens by a screw, was swung across the lens when winding on the film to prevent light getting in. The Ur-Leica was the first camera to feature coupled film winding and shutter cocking – thus preventing double exposures. The camera took its place as a milestone in the history of photography under the name ‘Ur-Leica’.The Leicas were innovative, by orienting the image frame sideways for the 35 mm film as opposed to the cine-camera tradition of across the film-strip. Leica Camera AG is a German company that manufactures cameras and lenses. The company was founded by Ernst Leitz in 1914. The name Leica is derived from the first three letters of his surname (Leitz) and the first two of the word camera: lei-ca. 14.06.2018 © 2018 Didier Ruef